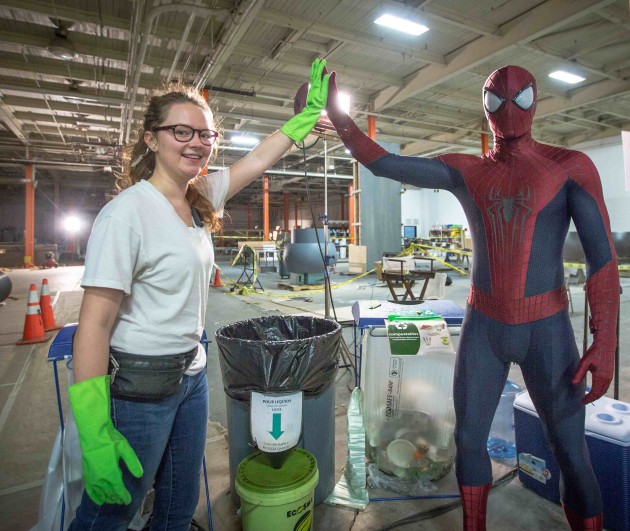 ‚Making movies without making a mess‘ is the motto of Eco Supervisor Emellie O’Brien, Co-Founder of New York-based Earth Angel Sustainable Production Services that made The Amazing Spider-Man 2 the most eco-friendly tentpole movie in the history of Sony Pictures. Besides greening theatrical feature film productions such as Noah by Darren Aronofsky and Gods Behaving Badly by Jon Turtletaub, Emellie O’Brien also makes a sustainable impact on prime time TV shows shot in New York City.

How do you help productions become sustainable?
I always tell crew members that I am a resource — not an enforcer. My approach is to make sustainability easy, engaging, and accessible. I do this through a variety of ways but mostly by being present — the crew responds more positively when they see that someone is actively monitoring the sustainability efforts and taking it seriously. I also offer incentives to crew members who go above and beyond to make the production more sustainable. Do you suggest what is practicable for a specific production?
I read the script and I meet with department heads and I assess all of the practical/logistical concerns. When it is 23°F degrees in New York City, we are not able to use biodiesel on the production. Cold weather is a major concern when it comes to biofuel. In situations like that, you count your losses and try to improve in other areas.

Are waste recycling and the re-use of props and wardrobe the easiest sustainable solutions because of their cost-effectiveness?
Waste reduction/recycling/reuse are definitely top priorities. They also happen to be cost effective most of the time, but that doesn’t make them easy solutions. The crew decides whether or not sustainable solutions are easy. If crew members communicate with me and integrate sustainable solutions into their workflow, that’s what makes those solutions easy. But not everyone is willing to change their habits.

Who wields the most influence to green a production, the director or the producer?
In my experience, it’s been the producer who is more likely to make sustainability a priority on set. However, all it takes is one person above-the-line to speak up in favor of running the production sustainably.

What other sustainable efforts were made during the production of The Amazing Spiderman 2? Eliminating plastic water bottles was also a huge feat for Spider-Man. We also incorporated sustainable products whenever possible — cleaners, detergents. We recycled batteries and film scraps, and limited paper distribution. Do you leave a lasting impact on productions? Having an Eco Supervisor on set is crucial to running an effective sustainability campaign. Plus, it pays for itself! My impact varies depending on the scale of the production. But on every show I’ve worked on, I’ve diverted at least 52% of the total waste from landfills and I saved productions thousands of dollars.

Do crew members pass this know-how on to their next productions?
Absolutely. I’ve had many crew members tell me after working on a green set with me that working on other sets that do not recycle feels “wrong.” I also have many folks tell me that they started recycling at home because of our efforts on set, which is by far the most rewarding aspect of my work. Successful sustainability campaigns leave a very strong impression on everyone involved. How difficult is it, in general, to convince film and television crews to change their workflows in order to produce sustainably? It is very difficult. Crews are often overworked and very frequently “running on empty.” Asking them to change their habits can be asking a lot, much more so than asking employees of other industries. I understand the unique demands of production, though, and I try to incentivize those crew members who are especially eco-conscious in order to encourage the crew to embrace our green efforts. It often takes the length of an entire shooting schedule to get the majority of the crew accustomed to the waste and water policies of a sustainable set.

What projects you are working on next? Right now, I am working on a feature from Big Beach Films called Three Generations. I greened my very first movie with Big Beach back in 2011, so it’s really nice to be reunited with a production company that truly values sustainability.