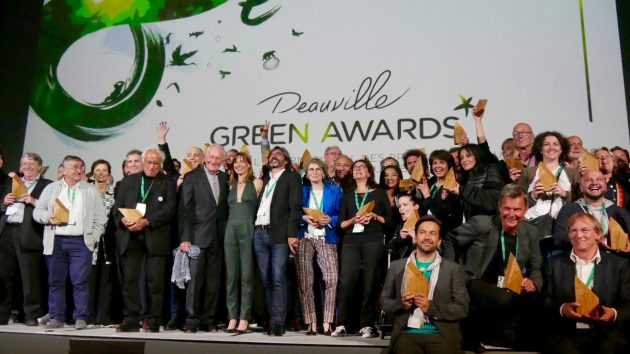 The fight against climate change, innovations, transportation, eco-mobility as well as the energy transition were among the topics at the 8th edition of the Deauville Green Awards, which featured about 420 documentaries, commercials and image films from all across the world. Climate and environment protection were an issue at the Deauville Green Awards not on screen only. This year, the festival also produced the event more eco-friendly.

"We created a charta with various measures. This includes the ban of single-use plastic, low-emission travel and accomodation of the team and participants as well as the calculation of the carbon emission footprint that was offset by our festival partner EcoAct“, points out Laurence Lafiteau, producer of the Deauville Green Awards. „Greening an event is a gradually process that we need to accelerate by sharing best practices, tips, experiences across the French and European industry. The Audiovisual and Media sector has to go forward quicker.“ "For this reason, we recently launched an initiative to green the creative industry." In charge of the initiative are the French filmmakers Cyril Dion und Laure Noualhat. After the successful documentary Tomorrow, they presented their new film Après Demain in Deauville. „We want to picture a better world and show how life could be in a better world“, underlined Dion. „This is our responsibility as filmmakers.“

Another key topic is to raise awareness for filmmakers when they are shooting in a wildlife reserve. "Big crews are troublemakers when they are putting their heavy equipment all over the place, when they are making noise and are producing light“ says Marina Ezdiari, the Ecoprod representative who did a workshop on biodiversity and filmmaking. „Hopefully, we come up with a factsheet that will be shared on a European level.“

The main topic of the 8th edition of the Deauville Green Awards was dedicated to biodiversity.  "The theme was up in the air", underlines  Georges Pessis, Honorary President of the nature and and envronment festival that he is heading together with the President Francois Morgant. For the first time, the festival also included various VR films in their program.

The World Wildlife Fund (WWF) France produced several VR films about whales and birds which let the viewers experience the work of the environmental organisation at close quarters. „We film our missions and bring the viewer right there via VR headsets“, says Michael Neveu, Head of Digital Communication, WWF France.

The French collective Ecoprod sponsored the special award for sustainable film production that was given to the German production outfit The Royal Film Company for the image film  Laureus Sport for Good – Neeta‘s Story.  The ambitious project is using sports  to strengthen the literacy and self-confidence of young women in India. „Unfortunately, we had to go to India by plane“, says the producer Moritz Schreiner. "Therefore, we reduced our crew to three people and we were offsetting the carbon footprint of our flight.“ The sustainable measures included the use of reusable batteries and LEDs, the abandonment of plastic bottles as far as possible as well as a mostly vegetarian and vegan diet.

How sustainable a film can be produced is also a matter of the availability of eco-friendly solutions. In their documentaries, commercials and image films, several filmmakers gave an insight into approved and new technological developments, which were presented in the innovation category. The use of water and wind power, smart cities were an issue as well as the use of hydrogen for automobiles. In L’Hydrogéne, clé de la mobilité propre, the French company Air Liquide presents an ambitious project which plans to launch a zero-emission fleet of 600 hydrogen-powered taxis in Paris and the Ile-de-France region by 2020.

Vehicles which are powered with hydrogen is the speciality of Stéphane Aver, President of Swiss company Aaquis, that gives out the innovation award in Deauville. „We have a new standard to store hydrogen for light mobility, which includes bicycles, scooters, motorcycles, small cars and small trucks for the delivery in the city." At the moment, Aaquis is deploying vehicles in China, Vietnam, Marocco, Dubai, in France as well as in Switzerland. The hydrogen is stored in cartridges that are distributed like drinks in vending machines. „We are using the same system.“ The location of the hydrogen storage automat can be found via an App, the payment is done by smart phone. The user can ride a bicycle with two or three wheels with a small cartridge for about 50 kilometers. For a scooter, he needs two bigger cartridges for a ride up to 100 km. In France, there is a growing interest in hydrogen-powered vehicles. „We are in negotiations with a French supermarket chain that will offer our bicycles to their customers and also use them for their delivery service."

All photos and videos: © GFS