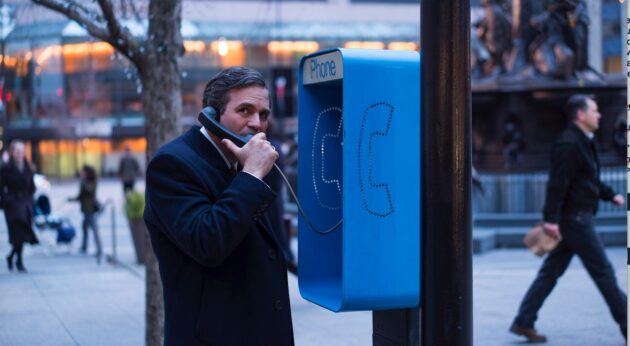 After the German premiere of Todd Haynes gripping drama Dark Waters at 2020 Filmfest Hamburg 2020 with Mark Ruffalo, Anne Hathaway and Tim Robbins in leading roles, the film opens in Germany. In this thrilling drama the American film director Todd Haynes tells the true story of the American environmental litigation attorney Rob Bilott, who uncovered one of the biggest environmental scandals of all time. For his merits the environment laywer received the  Right Livelihood Award in 2017.

Outraged, an older farmer from West Virginia storms into the elegant law firm in in Cincinnati und unloads his means of evidences by the box in the conference room. The videos show disturbung footage of his sick cows: The animals had blackened teeth; red, deep-set eyes; mal- formed hooves; and unusually discolored internal organs. The farmers have a hunch that there is a connection between the nearby dumpsite of chemical giant DuPont and their dead herds. This shocking evidence compelled this environmental litigation attorney who had been defending large corporations to switch sides.

This courageous attorney initiated a David-versus-Goliath struggle by filing a federal law suit against DuPont for its multi-billion dollar Teflon non-stick dry-film lubricant. For months, Rob Bilott poured over dozens of boxes of unorganized documents. The dedicated attorney trawled through 110,000 pages of internal corporate correspondence, medical and health reports,and confidential studies drawing on fifty years of the company’s history.

His research revealed that DuPont even had proof of the danger arising from exposure to perfluorooctanoic (PFOA). Despite this chemical’s deadly impact, 7,100 tons of PFOA sludge was dumped into a landfill which seeped into the groundwater. A study revealed that nearly 70,000 residents living near the landfill have been drinking contaminated tap water for decades. Many of them got cancer and died — like the farmer who first came to Rob Bilott.

The production company Participant launched a campaign to educate the public about the danger of forever chemicals, so called because they take so long to degrade. PFAS, the genus for about 4,700 different substance groups, is also a relevant topic in Europe. The European Food Safety Authority (EFSA) reduced by 1,700 times permissible levels of perfluorooctanoic, which is used for non-stick coatings on frying pans as well as for weather-resistant coatings on outdoor fabrics. The production, use, and import of PFOA will be limited within the EU starting on July 4, 2020. The Federal Environment Agency warns that other per- and poly- fluorinated chemicals (PFC) could be equally harmful.

Dark Waters star Mark Ruffalo visited the European Parliament in February and pointed out that PFOA is highly poisonous. Meanwhile the chemical agencies in Germany, Denmark, the Netherlands, Norway and Sweden are working on a proposal of a PFOA ban for the use of all substances which are not "indeispensable in society as whole". The Euopean Food Safety Authority will determine a "Tolerable Weekly Intake" (TWI) for four PFOA compounds which can be consumed in food on a weekly basis without dietary risks. The EFSA statement will also be the basis for the negotiations on the maximum allowable biological concentation of PFOA in food on EU level. On the occasion of the German premiere of Todd Haynes film Dark Waters Tobis Film and Filmfest Hamburg invited to the panel discussion "No fiction: PFAS, the ‘forever chemicals’ from the film Dark Waters threaten also our health". The participants included Chemistry experts Manfred Santen from Greenpeace, Ninja Reineke from Chem Trust Europe, Ulrike Kallee from BUND and Christoph Schulte from Federal Environment Agency, whose focusof work is dealing with problematic substances The discussion was moderated by Green Film Shooting Publisher Birgit Heidsiek.

At the panel discussion the experts revealed what kind of the consequences the industrial produced substances have for humans and for the environment. Due to their oil-, water- and dirt-resistant properties, the per- and polyfluorinated alkyl substances (PFAS) are lurking in various everyday products such as cookware, outdoor textiles, upholstered urniture, cosmetics, food packaging, floor polishes, insecticide formulations, and fire-fighting foams. The production, use, and import of perfluorooctanoic acid (PFOA) is prohibited within the EU since July 4, 2020. But there are more than 4,700 other per- and poly-fluorinated chemicals (PFC) which are not regulated at all.