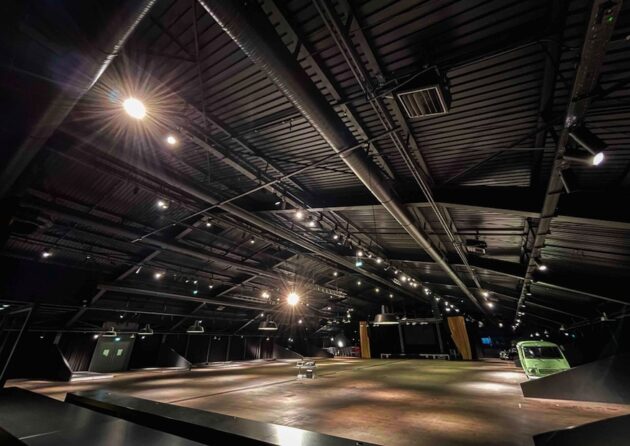 Efficient energy and building technology, power-saving lighting, the reuse of set decoration material, and a plastic ban — a growing number of film studios throughout Europe are adapting these sustainable measures. The Studio Hamburg Production Group was the first in Germany to introduce the eco-friendly production of TV series in 2012, and it extended sustainable practices to the day-to-day operations of the studio. “We welcome the next step, especially if further measures include photovoltaic systems on the stages and the green oases of urban living, planted facades”, says Michael Lehmann, Chairman of the Board, Studio Hamburg Production Group. “Planted facades don’t just optimize the insulation of building but they can also absorb fine particles as well as reduce noise pollution.” Berlin-based Studio Adlershof already implemented sustainable solutions for its energy supply and lighting a few years ago. Heating with environmentally friendly district heating from low-emission power-heat coupling, the use of energy-efficient LEDs in the studios, and the use of solar power generated by
its photovoltaic system reduce the studio’s carbon footprint. At Adlershof/Johannisthal, where the municipal development corporation Wista Management created a “science city” with
over a thousand tech companies and scientific institutions, is where the Lichthaus Group is located. The core business of the company, with more than fifty employees, is the conception of film technique. Besides cameras and lighting equipment, a stage and studio rigging as well as rental stages, it also operates its own fleet of vehicles.

Lichthaus is offering the brand new Jofa stage which has 1,300 square meters of floor space and an eleven-meter-high ceiling. This historically rich location is where the Johannisthaler Filmanstalten was built a century ago as the “world’s largest film stage”; nowadays it’s an energy efficient studio building with a stage, separate service rooms, and temporary production offices. The district heating comes from a biogas-powered cogeneration plant. Electrical energy needs are met by a photovoltaic system on the green roof, which has an output of 85,000 kWh per year. “It supplies not only electrical power for our stage but also for all the office and storage spaces as well as e-mobility charging stations”, says Mike Zimmermann, CEO, Lichthaus. The efficient use of energy and resources plays a crucial role in the newly opened Black Forest Studios, located in the heart of the Black Forest. 17,000 square meters of floor space contain seven stages whose sizes range from 100 to more than 2,000 square meters, which, at the high end, include separate rooms for dressing and make-up, offices, conference facilities, and two post-production suites. “We kept sustainability in mind during the planning phase”, emphasize the studio heads Nina and Sebastian Weiland. The building is heated by district heating, the lighting is LED, and the en- ergy supply is drawn from renewables. Further optimization will follow with the installation of photovoltaic and solar heating systems. The environmentally friendly methods and principles of the circular economy have also been integrated into the workflow routine of the Bulgarian production company B2Y, which is affiliated with the Boyana Film Studios in Sofia. The measures they have applied include a plastics ban and the composting of organic waste, which is used either as fertilizer in the studio‘s greenhouse or donated to a botanical garden. “It brings us one step closer to our goal”, says Alexan- der Kenanov, CEO, B2Y. “Composting helps reduce production waste as well as our carbon footprint.” The B2Y team even has its own behives which produce organic honey. Locally produced prod- ucts are part of gift bags that also include information on the environmentally friendly handling of waste management. B2Y produces commercial and international feature films, which include the crime drama Loving Pablo with Javier Bardem and Penélope Cruz and the action-adventure Kung Fury 2, which stars Arnold Schwarzenegger and Michael Fassbender. The wood for set decoration stays in the cycle. “We reuse drywall frames like lego blocks”, says Kenanov. “That speeds up the con- struction process by almost 30 percent, which leads to fewer prep days, less material use, and lower crew wages.” Wood that can’t be reused is turned into sawdust and wood chips, which is recycled as fertilizer.